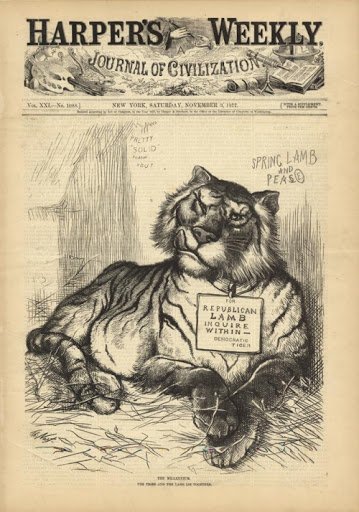 The image, a woodcut is offered framed.  Thomas Nast (1840 – 1902) was a German-born American caricaturist and editorial cartoonist.  Often considered “Father of American Cartoons”.  He was a strong critic of the Democratic Representative “Boss” Tweed and the “Tammany Hall Democratic Party”.  He is credited with the political symbol of the elephant for the Republican Party.  Over his career Nast was associated with the Harper’s Weekly newspaper. The print is rated Very Good [see our rating criteria on the Home Page] with normal age toning noted. The image measures approximately (15″ x 10″ – 38 x 25.5 cm).  Frame size is 15″ x 21″ with full matte.