The map is perhaps the most important cartographic issue of New York produced for the Revolutionary War period. It is one of the most detailed and accurate maps made for the British to aid in their various campaigns in New England. Unlike most of the mapping made up to that time; this map was complied from original surveys made in 1769 by Captain John Montresor. Inscribed on the map ‘To The Right Honorable Sir Jeffrey Amherst, Knight of the Bath and Lieutenant General of His Majesty’s Forces …’ Of note is the Land Grants of eastern New York and southern Connecticut. The first state of the map included inserts of White Hills, Connecticut and Lake Champlain. The map was originally published in four sheets in two. This offering is the lower right or bottom sheet of the two eastern sections of the map covering part of eastern New York and southern Connecticut as well as Long Island and the Hamptons. Printed on heavy paper the map is in light contemporary wash colors and is rated Very Good [see our rating criteria on the Home Page] with only normal age toning and a small damp spot located just below the title block on the right side. 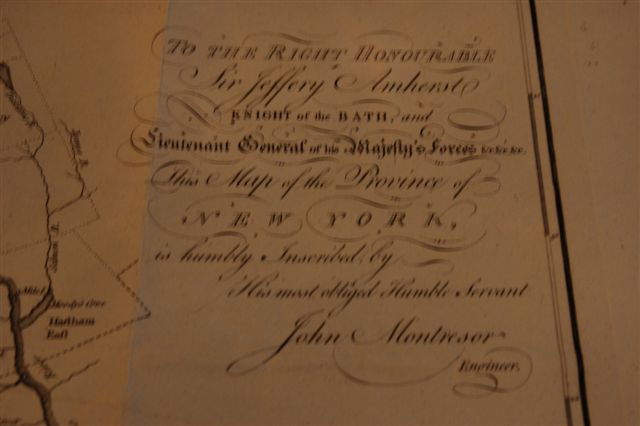