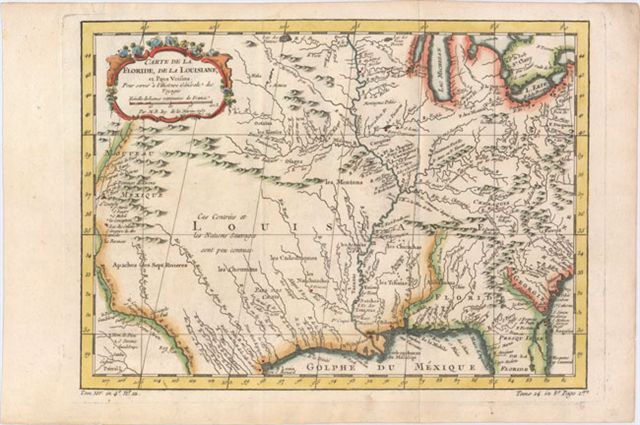 A very fine map of Louisiana and of northern and western Florida showing the French claims west of the Appalachians. From about 1650 to the middle of the eighteenth century, the French dominated the cartographic world with their advances in map making. This was never more evident than the maps the French produced of North America. Nicolas Bellin (1703-72), Hydrographer to the King of France, was one of the most noted of the French cartographers. This map covers an area from Lakes Michigan and Erie south to the Gulf coast, including the South Carolina and Georgia coastlines. Depicted is a large stretch of land identified as Louisiana that encompasses most of the known west, northward to New Mexico. The Mississippi River runs southward to the Gulf and includes the Texas coast to San Luis Pass with New Orleans, Biloxi, Mobile Bay, and Pensacola and the northwestern Florida coastline depicted. Many Indian place names, forts and early European settlements are shown. Nouveau Mexique in the far west, includes Santa Fe. The decorative title cartouche completes the outline colored map. It is rated Excellent, with a good and dark impression printed on watermark paper and measures approximately (11.9″ x 8.7″ – 30.3 x 22.1 cm).