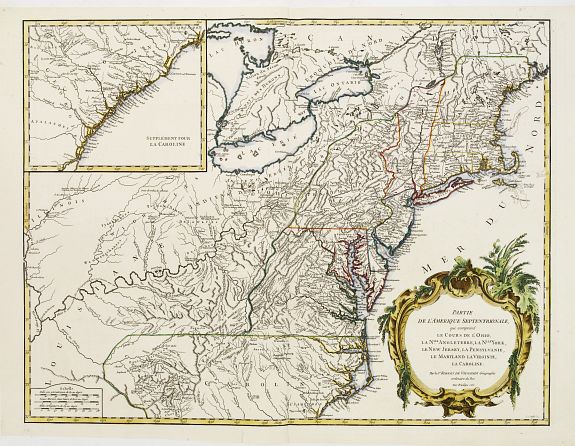 A very detailed engraving, extending the Mississippi and Illinois Rivers in the West and depicting the track of the Ohio River from its confluence with the Mississippi to its headwaters in New York. An insert at the upper left continues the main map from cape Fear south through the Carolinas and Georgia – F. St. Georges. It is based on the seminal map by John Mitchell that was published in the same year as this map. Topographic detail is impressive, mapping the trans-Allegheny and Great Lakes regions and the interior of New England. Another interesting feature is the “Forks of the Ohio” (confluence of the Allegheny and Monomgahela rivers) and the location of the French Fort Duquesne, a region that was contested during the French & Indian War. An elaborate title cartouche is featured, engraved by Marie Catherine Haussard. This is the first state of the map, with “Louisiane” in the western frontier and borders that pre-date the 1763 Treaty of Paris. The map is rated Excellent [see our rating criteria on the Home Page] with one small tear outside the neat line that has been repaired at the centerfold bottom. The map measurers approximately (24.4″ x 18.9″ – 62.0 x 48.0cm).