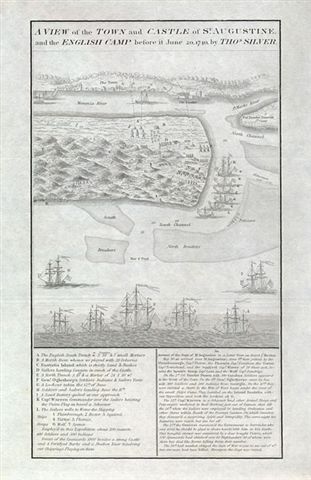 A later edition from A History of Georgia depicting British General John Oglethorpe’s first unsuccessful expedition against the Spanish at St. Augustine, Florida. The birds-eye view depicts the Matanza river, the castle, the North and South Channel and warships in the foreground. A lengthy key and explanatory notes fill the bottom third of the map. General Oglethorpe was the founder of the American colony of Georgia, which was situated as a buffer colony between Florida and South Carolina. This issue is a later edition of the original of 1740 – 42 map that appeared in Gentlemen’s Magazine (1740) and in “An Impartial Account of the Late Expedition against St. Augustine, Under General Ogelthorpe” (1742). The map is virtually identical to the earlier map editions. Printed on fine banknote paper, the map is rated Excellent [see our rating criteria on the Home Page] with no apparent flaws and measures approximately (6.6″ x 11.2″ – 16.8 x 28.5 cm).