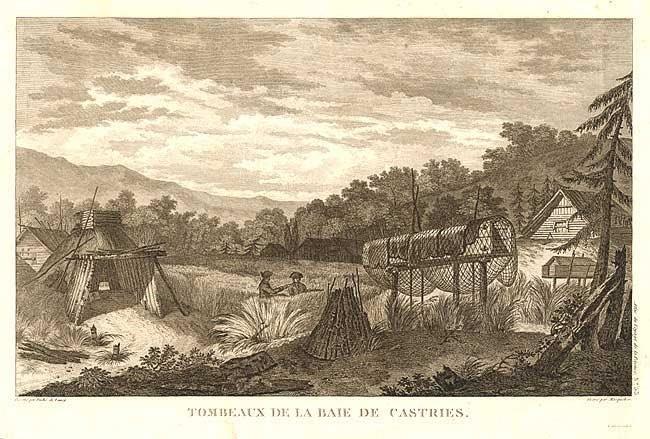 This is a copperplate engraving of the French scientific expedition commanded by Jean-Francois de Galaup to the Pacific in 1785-88.  Recognized as one of Frances’ foremost naval officers, he was selected by King Louis XVI to complete the efforts of Captain James Cook’s explorations of the western Pacific.  La Perouse explored the coasts of the Gulf of Alaska and northwestern North America in search of the fabled route across North America (Northwest Passage) that would connect the Atlantic to the Pacific coast.  After Leaving America his expedition continued on to Asia where he explored the region from Kamchatka to Macao and the Solomon Islands in the South Pacific.  The expedition vanished after leaving Botany Bay, Australia in 1788.  This print shows the French encampment at Kamchatka.  The print measures approximately (16.1″ x 10.2″) and is rated Very Good [see our rating criteria on the Home Page] with only slight foxing noted in the upper left corner.  The print is accompanied by a certificate of authenticity inscribed with the purchasers name.