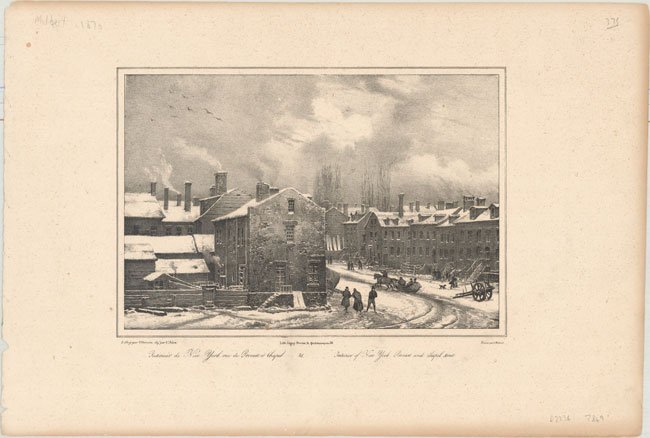 The print is by the famous French naturalist and artist Melbert.  He spent 7 years in the United States traveling and recording his experiences as part of a scientific mission in 1815.  Melbert made drawings of the various places he visited.  Upon his return to Paris in 1822 he commissioned several lithographers to engrave his images which became part of the publication Itineraire Pittoresque, that contained some 50 prints of the United States.  This image of New York City was one published by Henry Gaugain and was then found in a later edition by Imprimerie Lithog de Ligny Freres, Paris.  The winter scene depicts Provost and Chapel Streets in Manhattan.  The print is rated Very Good [see our rating criteria on the Home Page] with light toning noted and a few foxing spots with wide margins.  The print measures approximately (11.9″ x 8.3″ – 30.3 x 21.1 cm).