22.21 - Chinese Military Drawn Out in Compliment to the British Embassador, dated April 12, 1796, by George Nicol, London 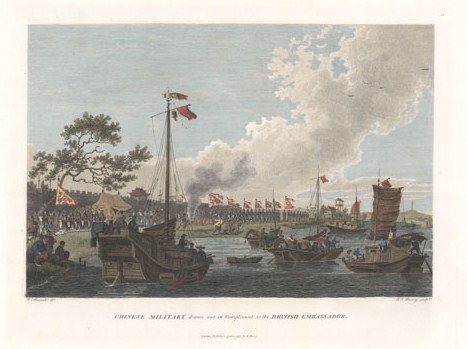 This engraving was made from a drawing by William Alexander, who accompanied the first British Embassy in China in 1792-94.  This view appeared in the records of George Macartney’s travels to China and published by George Nicol.  Macartney was Great Britain’s first envoy to China, and was tasked to convince Emperor Qianlong to ease the restrictions on trade between Britain and China, and to allow Britain to establish an embassy in the country.  Lord George Macartney (1737 – 1806) was a British earl, for the promotion of science and commerce to China.  The view depicts an elaborate presentation from the Chinese military in honor of Lord Macartney’s visit.  The print is rated Excellent [see our rating criteria on the Home Page] with a crisp impression printed on heavy paper a “1794 J. Whatman” watermark and hand colored.  Wide margins, the print itself measures approximately (13.9″ x 9.4″ – 35.3 x 23.9 cm).