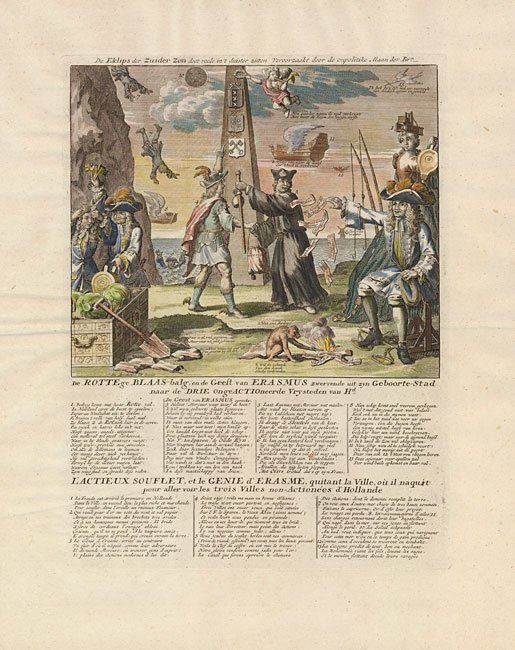 This satirical French engraving depicts one of the most infamous financial meltdowns in history, that swept through Europe in 1719-20.  John Law, as Scottish financier established the Banque Generale in France.  He then granted control of Louisiana d’ Occident in 1717.  Law conceived an elaborate scheme to exploit the resources of this new region of French control in North America.  Europeans rushed to invest in this new land.  This resulted in the creation of several companies such as the English South Seas Company and other smaller firms in the Dutch Republic.  The share price of the Compagnie de la Louisuane d’ Occident rose dramatically in 1720.  By the end of that year, the “bubble” burst; speculators cashed in, thus causing a panic on the shares and the company went bankrupt.  The resultant action caused thousands of investors across Europe into ruin.  The term “bubble” was thereafter a phrase that applied to all such schemes.  The image shown here depicts an obelisk decorated with the Arms of Amsterdam, Haarlem, and Leiden on the sea shore with several figures which are numbered in text below the image.  On the right is Fraud with a mouse-trap on her head, blowing into the back of John Law seated throwing money.  In the center section is Eramus, in the habit of a pilgrim, and Mercury exchanging money bags, while a cherub representing Fame holds a wreath to the obelisk, blowing his trumpet.  The print is rated Very Good, with only normal age toning noted.  It measures approximately (10.5″ x 13.4″  – 25.5 x 33.5 cm with very wide margins).