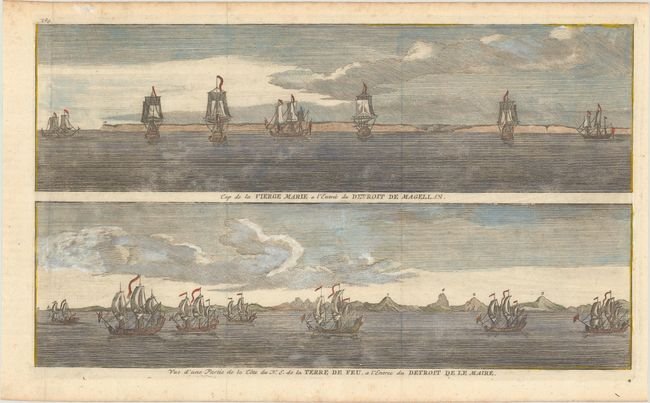 This print shows two views from George Anson’s voyage through the Strait of Magellan and the Le Maire Strait.  In 1740 Anson set sail commanding a squadron sent to attack Spanish possessions and interests in South America.  He encountered difficulty and by June 1741 his force had been reduced to only three ships of the original six ship fleet.  Additionally, his crew had been reduced to 335 from 961.  After launching several attacks on the west coast of South America and recuperating on the island, he collected the remaining survivors on his flagship, the Centurion , and set sail in search of Spanish galleons in the Philippines.  He returned to England in June 1744.  The print is in very good condition with only faint aging spots noted and fold marks – as issued.  The print measures approximately (14.3″ x 8.2″ – 36 x 20.8 cm).