520.49 - A New Map of the King of Great Britain’s Dominions in Germany, or the Electorate of Brunswick-Luneurg and its Dependencies, dated 1789, by Thomas Jefferys & William Faden, London 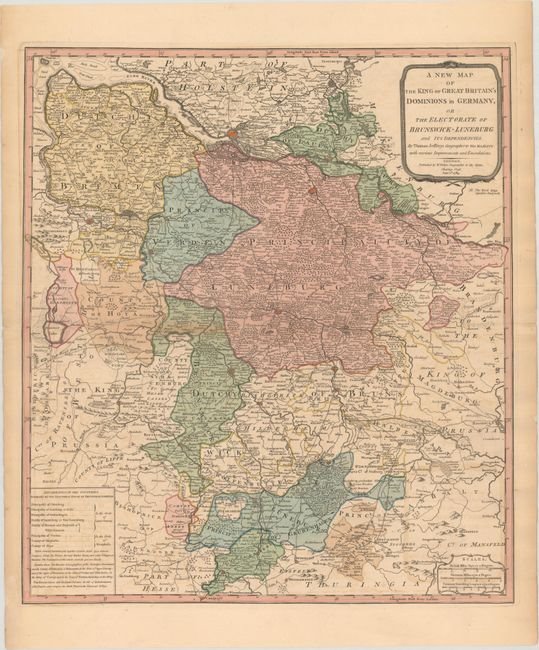 One of the classic maps produced by Jefferys during the 18th century.  Appointed Geographer to the Prince of Wales; in 1760 became Geographer to the King.  In the early 1760’s Jefferys produced a series of English county maps, but was in debt at the time and filed for bankruptcy in 1766.  He then partnered with Robert Sayer, who reissued many of Jeffery’s plates including this map.  This large-scale map focuses on the present-day Lower Saxony, extending from Hamburg in the north to Kassel in the south.  Cartographic features include extensive detail of cities, topographic features such as rivers, mountains and forests are depicted.  Political boundaries are noted.  Other aspects of this map include titles unchanged by Sayer such as William Faden’s identity as another noted English cartographer.  The region, at the time of this issue; was known as the Duchy of Brunswick-Luneburg.  The map is rated Excellent [see our rating criteria on the Home Page] printed in full original color on watermark paper.  There is light toning noted along the edges of the map and a short centerfold split in the left blank margin that has been repaired on the verso with archival material.  It measures approximately (20.7″ x 23.4″ – 52.6 x 59.4 cm).